Jubaland historically comprised of Lower and Middle Juba states.  But military dictatator and ex-President Siad Barre split up the region in 1975, adding Gedo (created as an enclave for Barre’s Darod-Marehan clan members), Bay, and Bakool states.

The region has seen decades of conflict due to controversial clan resettlements (see section 3.1 here,) inter-clan fighting, warlordism, Islamic militancy, and fighting over control of lucrative areas like Kismayo port.

Currently, there are efforts by local groups in coordination with the Intergovernmental Authority on Development (IGAD) to reunify Lower Juba, Middle Juba, and Gedo as Jubaland–even though the Somali government and its allies are still attempting to oust al-Shabaab from many parts of these areas.

According to documents from one Jubaland organization, there is a belief that regional governments are better positioned to meet the needs of local communities. For this reason, Somalia has adopted a federal constitution that allows the decentralization of powers.  (Somaliland serves as the obvious example of a region that has sought independence rather than semi-autonomy.)

For more information on the committees charged with forming Jubaland and the state’s administrative structure, see here.

In the last several weeks, Jubaland committee members have been travelling through the region to brief audiences and elicit public opinions from a broad cross-section of communities–including women’s organizations, clan elders, youth groups and religious scholars.

Commitees also have reached out to refugee camps in Kenya, the Diaspora, and other areas outside Somalia.

Overall responses are mixed but many support the process to officially form the state–which under the constitution must unite 2 or more formally existing states.

Some groups have called for the federal government to endorse the legal right of communities to form Jubaland since Mogadishu often has appeared wary of the new state (as will be explained below.)

There are even fears that President Hassan Sheikh Mohamud is seeking to limit the ability of regional governments to appoint its leaders without approval from Mogadishu.

In reality, this would involve a lot of moving parts–including the tricky process of getting Parliamentary approval to amend the constitution.  The chance of that seems unlikely.

The final conference to formalize Jubaland is slated to take place in late January 2013 in Kismayo.  Arrangements are currently being made to bring 522 delegates to the city for the event. The election of Jubaland’s “president”–a common title among regional heads in Somalia–is due at the end of February. 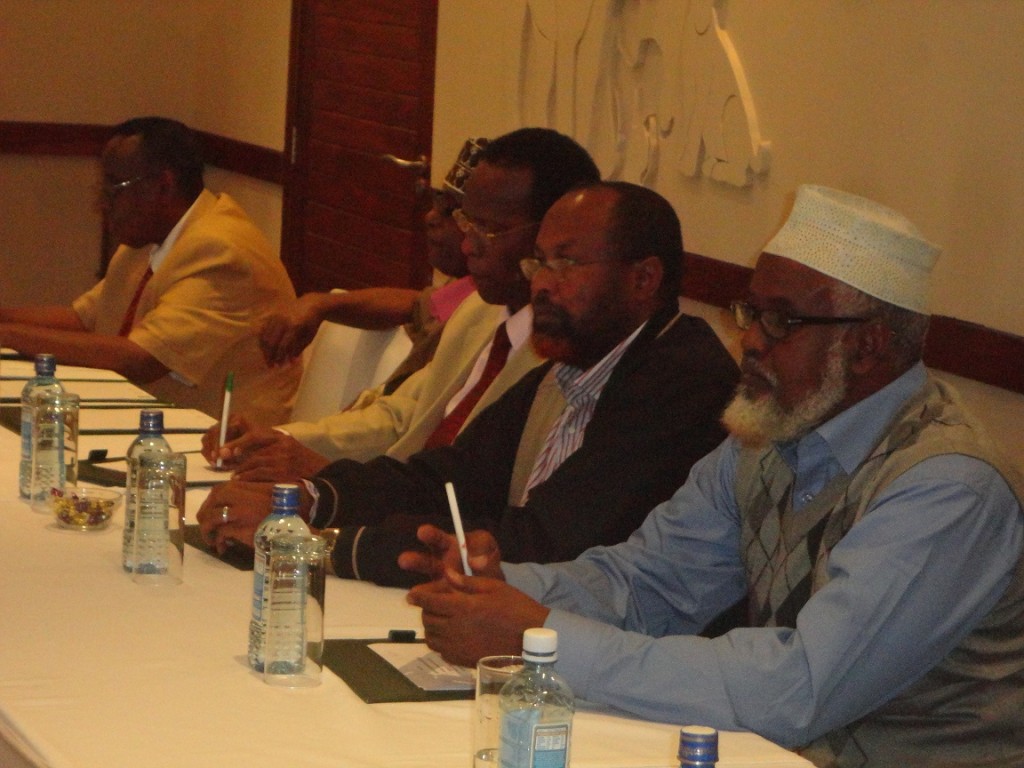 Sheikh Madobe (right) in Nairobi for Meetings on Jubaland

Sheikh Ahmed Madobe–who was formerly in the Islamic Courts Union (ICU) and later in other militia groups aligned with al-Shabaab–is slowly attempting to regain his status in Jubaland after suffering defeat at the hands of his old allies in 2009.

As leader of Kismayo’s now pro-government clan militia Ras Kamboni, Madobe has been meeting with key individuals from the Juba region in Nairobi to ensure the process is running smoothly.

From another angle, this can be seen as subtle (or not so subtle) politicking by Madobe to convince influential players that he should be elected to Jubaland’s presidency or to another high-level position. This would represent a significant comback for the man who governed Kismayo with the ICU in 2006.

There are several critical sub-plots to the Jubaland process that should be noted.

Clan Rivalries: Many commentators have framed the Jubaland issue as “qabilism” (clan-centered politics) by another name. For example, there is still some debate among clans about the representative nature of the Jubaland process. (The myriad of clans that are involved include the Darod, Hawiye, Bantu, Dir and their associated sub-clans.)

There’s a general consensus that Darod clans (especially the Ogaden sub-clan) are most influential in the initiative. But in addition to  the uproar that non-Darod clans may raise about this, it is important to note the past rivalries between Darod sub-clans themselves (e.g., Marehan and Ogaden.) This could be a significant source of conflict as Jubaland’s administration is selected and begins to govern.

Unless these tensions are managed effectively, Jubaland easily could unravel and eventually break up into areas that are controlled by smaller rival factions. This is an opportunity that a group like al-Shabaab would love to exploit, and it has taken advantage of clan tensions consistently in the past.

Role of Federalism in Somalia: Jubaland represents the latest example of what Somalia’s version of federalism looks like.   It will be interesting to see how political and social forces react.  Even though the constitution lays out the basic grounds of federalism, there are many questions to be answered:

These ambiguities are sure to continue stirring tensions between Mogadishu and Jubaland in the coming months, and it is unclear if Jubaland committees have answered these critical issues.

Simply put, a local or regional government is only as good as its institutions and performance.  Thus, the existence of a Jubaland does not inherently resolve some of the institutional crises that have plagued Somali governance. However, there seems to be enthusiasm that Jubaland can do this.

Role of the International Community in forming Jubaland: The tug-of-war between IGAD members Kenya and Ethiopia to influence the Jubaland process has often been highlighted in the media. Kenya wants a regime in Jubaland that can act effectively as a “buffer zone” to prevent violent elements like al-Shabaab from entering its territory.  Ethiopia would like a similar buffer zone but one that does not give more leverage to elements that are sympathetic to rebels in eastern Ethiopia, namely the Ogaden National Liberation Front (ONLF).

According to reports, Kenya’s military prefers security figurehead Madobe while its intelligence branch prefers academic Dr. Mohammed Abdi Gandi. However, Madobe may be at an advantage since [1] he commands a large militia responsible for security in the strategic port of Kismayo and [2] he is allegedly favored by several factions in the Ethiopian government.

To put it more bluntly, Ethiopia and Kenya are seeking proxies in Jubaland–a strategy that has contributed to significant instability in Somalia for decades.  Even with these motives made public, many Somalis feel that Kenya and Ethiopia’s involvement in Jubaland is understatedly self-interested.

Central to this argument is a controversial Memorandum of Understanding arranged by Ethiopia and Kenya with Somali government signatories.  The document outlines the countries’ extensive plans to shape the region in order to secure Ethiopia and Kenya’s interests. To many, this is an outright infringement on Somalia’s sovereignty.

Though it might not be a perfect process, Jubaland is the latest effort to find an approach to governance that fits Somalia’s unique social, political, and economic landscape. Hopefully, it succeeds.

Like Loading...
‹ 2013 in Somalia: A Look at Security
Details and Analysis of France’s Failed Rescue in Somalia ›