Jahba East Africa has emerged as the newest pro-ISIS splinter group to break away from al-Qaida affiliated al-Shabaab, which has tried to stifle the growth of a pro-ISIS elements in Somalia.

In a press statement, the group pledged loyalty to ISIS leader Abu Bakr al-Baghdadi, stated that life in al-Shabaab had become “a psychological and physical prison,” and urged East African militants to join other splinter groups.

Jahba’s allegation that “many Kenyans, Tanzanians, and Ugandan Mujahideen have been accused without evidence of working against Islam” comes as al-Shabaab recently executed a Tanzanian on charges of being spy.

The statement also implied that Jahba members may focus some operations outside Somalia in east Africa where many of its members are from:

“Many of the newly created JAHBA EAST AFRICA Mujahideen were carrying the sword in Somalia and some returned back home to open up new fronts.” 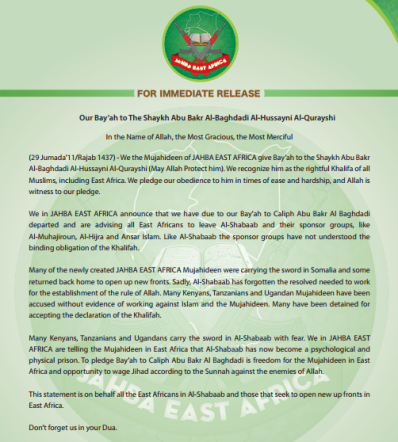 VOA journalist Harun Maruf pointed out that the group actually mis-spelled its own name, calling itself “Jahba” instead of “Jabha”, the Arabic word for Front.

In addition, Jahba did not appear to release any associated video to prove it existed beyond the press statement, but a self-proclaimed Twitter account for the group was established.

At least two breakaway groups including an independent pro-Shabaab group known as al-Muhajiroun and a pro-ISIS group led by Puntland-based militant Abdulkadir Mumin have appeared on the scene.

Al-Muhajiroun appears to be a digital project rather than a warfighting faction on the ground.

Mumin’s crew at least released a video to show it had some two dozen fighters, but has not appeared to launch any spectacular attacks.

So, the question remains if “Jahba East Africa” is just a jihadist’s graphic design idea that was picked up by mainstream media, or if it is a force to be reckoned with.

Judging by the lack of thought and energy put into Jahba’s introduction, al-Shabaab amir Ahmed Diriye may feel more annoyed than threatened.

In fact, al-Shabaab may be able to enhance perceptions of its resiliency — especially in relation to ISIS — if it continues to crush weak pro-ISIS splinter groups in Somalia.