The population at Kenya’s Dadaab refugee camp has plummeted by 60,000 people in the last two months, according to data provided by UNHCR, begging the question — what are the factors driving such a drastic reduction in the population could occur in the world’s largest refugee camp?

At the end of July, UNHCR reported that the total population of the camp was 338,043. The organization also reported that it was in the process of conducting a verification exercise to get a more accurate picture of the camp’s population.

In September, UNHCR calculated that the population had dropped to 276,945 – a difference of more than 61,098 people in just two months.

The report also released results from the population verification exercise. UNHCR concluded that its previous estimate of the population was off by 58,016 people (via Reliefweb):

The main findings of the exercise showed that out of 341,574 individuals registered in the Dadaab camps, 283,558 individuals were present in the camps.

During the exercise, 25% of the current refugee population in the camps expressed their willingness to return (69,532 Somalis, 264 Ethiopians and 15 from other countries).

A total of 24,655 individuals confessed to be Kenyans registered as refugees and another 3,355 households (15,799 individuals), at least one member has applied for or holds a Kenyan ID card.

In total, as of 15th September, 30,349 Somali refugees had returned home since 8th December 2014, when UNHCR started supporting voluntary return of Somali refugees in Kenya, out of which 24,248 were supported in 2016.

Combining the 24,248 refugees who have returned this year and the 40,454 people impacted by double-registration leaves a count of 64,702 – which would explain the rapid drop in Dadaab’s reported population.

But according to Human Rights Watch, misinformation and intimidation is playing a role as important as methodology in driving the camp’s numbers down:

During an August 2016 visit to Dadaab by Human Rights Watch, refugees described intimidation by the Kenyan government, silence over alternative options that would allow them to remain in Kenya, inadequate information on conditions in Somalia, and a US$400 UN cash grant they would forfeit if they were deported later this year. The refugees said that these factors were prompting many camp residents to return now to Somalia, where they face danger, persecution, and hunger.

“The Kenyan authorities are not giving Somali refugees a real choice between staying and leaving, and the UN refugee agency isn’t giving people accurate information about security conditions in Somalia,” said Bill Frelick, refugee rights director at Human Rights Watch. “There is no way these returns can be considered voluntary.”

UNHCR-Somalia officials acknowledged to Human Rights Watch that their assessments indicate that conditions in south-central Somalia are not conducive to mass refugee returns in safety and dignity. UNHCR’s latest assessment in May found: “Civilians continue to be severely affected by the conflict, with reports of civilians being killed and injured in conflict-related violence, widespread sexual and gender-based violence against women and children, forced recruitment of children, and large-scale displacement.”

“I was poor in Dadaab, but I am destitute here,” said Abii, whose angular features were framed by a flowing blue headscarf tucked tightly beneath her chin. “The Kenyans told us it’s time to return to your home country. They told us we don’t have a choice.”

On 2 October, the Jubaland administration explained repatriation without increased assistance for returnees and thousands of already internally displaced persons (IDPs) would exacerbate the humanitarian situation in the region. 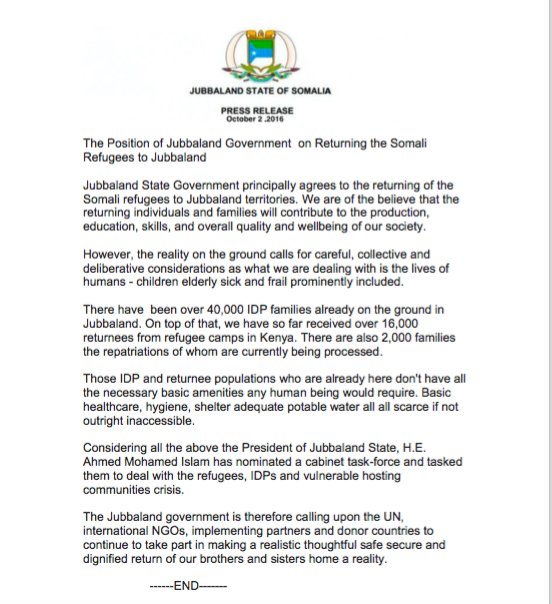 But unfortunately, the priority appears to be on emptying Dadaab rather than recognizing the immediate and long-term impacts of illegal and forced mass returns.

Like Loading...
‹ PHOTO TIMELINE: U.S. Airstrike Stirs Conflict in Somalia
Step-by-Step Guide: How to Run for President in Somalia ›