This is the first in a multi-part series about Somalia in 2013.

In 2012, the Somali National Army and its partners in AMISOM and Ethiopia retook major al-Shabaab strongholds–including the lucrative port of Kismayo–and essentially confined al-Shabaab to the southern region’s smaller towns and back roads.

However, al-Shabaab’s current territorial possession is still fairly sizable, and it still directly controls the strategic port of Baraawe, which is important for taxing imported goods and the facilitation of fighters and resources.

Somali government-allied forces encountered some bumps along the way, but there were many successes due to several factors.

[1] International Coordination rather than Unilateral Action: Efforts by Kenya, AMISOM, Ethiopia, and Somalia proved that international coordination was a much more successful strategy compared to the failed unilateral action taken by Ethiopia from 2006-2009 to oust Somalia’s insurgents.

Recent operations to defeat al-Shabaab have avoided the same scale of humanitarian casualties and battlefield losses incurred by Ethiopia in its last invasion. And because al-Shabaab slowly became less popular, the group could not rally as much local and Diaspora support as it did against its historical rival Ethiopia to fight “foreign invaders” in 2006.

[2] Al-Shabaab’s Tactical Withdrawal and Dwindling Popularity: Al-Shabaab’s main response to the tactical success of Somali government-allied forces has been to “tactically withdraw” from areas where it has come under pressure in order to preserve the lives of its forces. The group since has relied on ambushes and increasingly on firing mortars and deploying improvised explosive devices (IEDs) against security targets. But the use of indiscriminate tactics have not always helped it retake territory and have contributed to a declining popularity due to civilian casualties incurred.

Thus, in 2012, al-Shabaab grew increasingly unpopular in many parts of the country due to this factor and other radical policies–including forced recruitment, suicide attacks that injured innocent civilians, and heavier taxation in areas it controlled.

[3] Fractures Within al-Shabaab: The often noted tensions between rival al-Shabaab leaders featured prominently in 2012 because of the group’s official merger with al-Qaida, the removal of almost all aid groups in its areas (which disproportionately affected the communities of certain al-Shabaab leaders, aka, Mukhtar Robow), and disagreements over the role of foreign fighters, among other issues.

And Godane continues to fued with Sheikh Hassan Dahir Aweys over the latter’s role in the group. Rumors of Aweys’ defection are abound. Though there were rumors that negotiations with the government were imminent, Aweys’s recent statements still have indicated a strong opposition to the current government, and Godane has made it “illegal” to form another Jihadi group in Somalia–putting another obstacle in front of Aweys’s supposed ambition to leave the group.

In a more bizarre fashion, American fighter Omar Hammami became an outspoken and endangered critic of the group’s strategies, finally drawing a direct rebuke from al-Shabaab’s Twitter spokesperson. He is presumably fearing for his life and under house arrest somewhere in Lower Shabelle.

These tensions likely have had an effect on the overall morale of al-Shabaab forces–convincing them to either defect, flee, or give up in many cases. So, it will be interesting to see how the dynamics evolve between leaders and militias loyal to Godane, Aweys, and marginalized leaders like Mukhtar Robow in the new year.

Critical Questions for Security in Somalia in 2013

Upon his selection, President Hassan Sheikh Mohamud famously said that his first three priorities would be security, security, and security. But will his new government be able to re-sculpt the security landscape in the country? Here are some key questions:

[1] Will the Somali government fulfill its promise to pay government troops consistently and to eradicate illegal checkpoints and extortion? In recent years, the Somali government’s inability to pay security forces–due to corruption, lack of funding, or weak financial structures–contributed to the defection of soldiers to al-Shabaab or the creation of illegal checkpoints in which security forces extort local residents, taxi drivers, and businesses.

Other security forces–driven by inconsistent payment, greed, or indiscipline–often have arrested innocent residents on charges of being an al-Shabaab member and are only released after paying a bribe.

There are signs that the Somali government has recognized the need to ensure payment to security forces: the 2013 budget made sure to allocate more funds to do so and other reports indicate that soldiers who went months without payment are finally being compensated.

If this is not taken up, President Mohamud will have failed on items 1, 2, and 3 of his presidential agenda, and this will surely impact his ability to exercise his authority in the country.

[2] What will be AMISOM’s Future in Somalia? Initially deployed to Somalia in 2007, AMISOM gradually has been able to familiarize itself with the terrain and gain the trust of many local communities. It can now be considered a success story of multilateral forces in a conflict zone.

However, AMISOM’s undetermined tenure in Somalia will be a big question in 2013, as its mandate runs out in March.

It will likely be extended, but how long will AMISOM’s 17,000 forces remain the lynchpin of security in Somalia? Though countries like Sudan and Turkey have offered to train Somali security forces, it is hard to tell how long it will take to successfully reform the top-heavy leadership structure and mishmash of often independent clan militias that comprise Somalia’s security apparatus.

Along with consistently paying security forces, President Mohamud and Minister of Defense Abdihakim Fiqi will need a long-term plan to train local forces and facilitate the eventual withdrawal of AMISOM–and Ethiopia for that matter.

[3] Will Somalia integrate independent militias? Somalia has long been a country in which militias devoted to specific leaders, clans, and outside proxies trump regional and national loyalties. But could 2013 be the year in which militias like the Ethiopia-backed and pro-Somali government Sufi militia Ahlu Sunna Wal-Jama (ASWJ) formally come under the command of the Somali government? Early indications say yes.

However, other pro-government forces like Ras Kamboni–under the leadership of former ICU leader Ahmed Madobe–appear as if it will continue to act both independently and with strategic support from Kenya in order [1] to keep control of the lucrative port of Kismayo and [2] to re-establish Jubbaland with the support of IGAD as a semi-autonomous state under its control.

While this may be tolerated by the Mohamud administration in the short-term in order to maintain the stability of Kismayo, this could become a destabilizing point of contention between Madobe, the central government, and Somalia’s neighbors in the mid- to long-term–one that al-Shabaab would love to exploit.

Thus, frank and open discussions are needed to determine the appropriate role of local and federal, and regional authorities in Kismayo and the Jubba region.

[4] What will be al-Shabaab’s overall strategy for 2013? As previously stated, al-Shabaab has begun to rely more on hit-and-run attacks throughout southern Somalia since abandoning many of its fixed positions in 2012.

The volume of attacks in Mogadishu show that the group still has a strong presence in the capital, as the Dayniile district security officials have admitted, even though al-Shabaab has withdrawn its main forces from there. So, Mogadishu will continue to be a focal point.

The group also will use Puntland’s Galgala mountains and surrounding areas as a staging ground for attacks in northern Somalia. It will also use religious ideologues like Sheikh Abdiqadir Mumin to drum up local support in Puntland by exploiting local political dynamics, such as President Abdirahman Farole’s attempts to extend his term by one year.

Al-Shabaab may expand operations in Kenya by organizing direct attacks close to the border in Garissa and Mandera and by tacitly or directly supporting sympathizer groups in Nairobi.

Since al-Shabaab suspects have been arrested in Ethiopia and Tanzania–countries where there have been al-Shabaab elements for some time–there are fears that al-Shabaab may be attempting to organize attacks in other parts of the region.

While a significant attack abroad would draw priase from the international Jihadi community, this move wouldn’t do much for its local reputation in Somalia where the group really needs support.

It also could upset al-Shabaab leaders who want to prioritize the group’s resources on accomplishing goals inside Somalia.

On the diplomatic side, it can be expected that al-Shabaab will continue to promote its efforts to provide vital resources to local communities and to resolve violent clan disputes when possible. 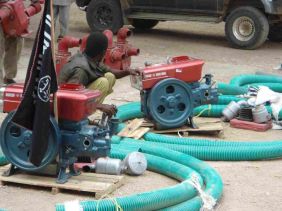 However, it is unclear if this can make up for the negative repercussions for its attacks elsewhere.

Depending on how the above factors interact will have a great bearing on the ability of Somali government-allied forces to maintain its territorial gains.

But for the sake of those that continue to be affected by the ongoing violence in Somalia–and for those many who desperately wish to return to the country–it should be hoped that all armed actors in Somalia act more responsibly in the new year and seek to protect civilian lives and promote prosperity in country with a bright future.