Video, Transcript, and Highlights of Kenya and Somalia’s Maritime Border Battle in Court 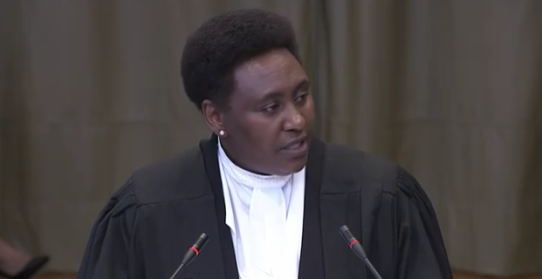 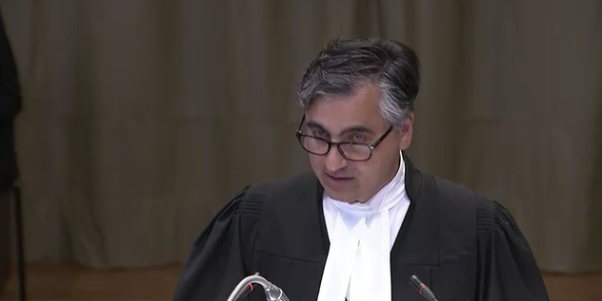 On Monday, Kenya’s legal team kicked off arguments at the International Court of Justice (ICJ) to determine whether the court will have jurisdiction in the case involving the disputed maritime boundary with Somalia. The Somali government has requested the ICJ adjudicate the matter, while Kenya is seeking to have the dispute resolved through other means as provided in an infamous 2009 Memorandum of Understanding (MOU).

UN TV has the full archive of Monday’s session on its website, and proceedings will continue through 23 September.

The arguments in this case are complex and wind through a myriad of international statutes, statements, declarations, and treaties. Below is a series of excerpts that explain a portion of the arguments Kenya made during Day 1. Kenya’s full testimony is here.

In the session, Karim Ahmad Khan — the high-powered British lawyer who got Kenyan Deputy President William Ruto out of his war crimes case at the International Criminal Court — tells the ICJ that Somalia has abandoned the argument that the MOU entered force upon signature and now claims that it is “null and void” because it violated Somali law. Khan, however, argued that this argument does not hold water:

[Somalia] claims that the MOU was rejected by a parliamentary vote on 1 August 2009 because it was inconsistent with the Somali Transitional Federal Charter, which it asserts required ratification of all international agreements. That argument is both irrelevant and wrong, both as a matter of fact and law. Internal law is, of course, not a ground for violation of international obligations, as is made clear by Article 27 of the Vienna Convention on the Law of Treaties.

Khan cited a key court judgment as evidence for this point:

As noted by the Tribunal in the Case Concerning the Arbitral Award of 31 July 1989 (Guinea-Bissau v. Senegal): “[a]s for the practice of international courts and arbitral tribunals, there was no precedent of a treaty being declared null and void because one of the contracting States had violated its own internal law in signing it”.

Kenya’s legal team also argued the MOU provided that a final decision on the maritime border could not be reached before the Commission on the Limits of the Continental Shelf (CLCS) published its recommendations on the issue:

“[the MOU states] ‘after the Commission has concluded its examination of the separate submissions made by each of the two coastal States and made its recommendations to two coastal States concerning the establishment of the outer limits of the continental shelf beyond 200 nautical miles.’

…Under the MOU, the Parties agreed to conclude a delimitation agreement only after CLCS review. This is a precondition to move to the next stage of the agreed procedure. It is a binding obligation. Somalia claims that this requirement is illogical because it will be a decade before the CLCS considers its submission26. But it is not unusual for boundary agreements to be finalized over several years. Furthermore, Somalia’s submission is likely to be considered earlier than anticipated. It should be recalled that Kenya’s submission was initially scheduled for 2022 but came in the queue for 2014, eight years earlier. Somalia may similarly jump the queue…

…Contrary to what Somalia claims, this does not mean that the parties cannot negotiate prior to CLCS review. That would be absurd. The parties may negotiate prior to the CLCS. recommendations: but they may finalize an agreement only after delineation of the outer limits of the shelf.”

Kenya’s legal team also argued that while Somalia has claimed prior negotiations have “failed,” it in reality had refused opportunities to continue talks:

“…Kenya called for the negotiations in 2014 because of Somalia’s breach and repudiation of the MOU. Somalia had objected to Kenya’s CLCS submission in February 2014. The Parties held their first meeting in March 2014. Kenya proposed to discuss the MOU. Somalia refused. Kenya wished to discuss the matter again at the second meeting in July 2014. Again, Somalia refused. This was hardly a proper negotiation of the maritime boundary.”

In addition, Kenya claimed that even if the two countries had never signed the MOU, the ICJ would still not have jurisdiction in the case under the United Nations Convention on the Law of the Sea (UNCLOS). Kenya disagreed with Somalia’s interpretation of Part XV of UNCLOS, which addresses the process for settling maritime disputes under the UNCLOS statutes. Among other points, Kenya claims that even under Part XV, ICJ does not have jurisdiction at this time.

Article 280 of Part XV still provides that the parties may agree to settle a dispute “by any peaceful means of their choice”. Thus, the MOU applies even under Part XV. In fact, Article 281 (1) clarifies that the procedures apply only “where no settlement has been reached by recourse to such means and the agreement between the parties does not exclude any further procedure”. Furthermore, Article 281 (2) specifically provides that “[i]f the parties have also agreed on a time-limit, paragraph 1 applies only upon the expiration of that time-limit”. In this case, CLCS review is a time-limit. Part XV is not applicable prior to its expiration. Even after CLCS review, the next step under Part XV is to “exchange views regarding its settlement by negotiation or other peaceful means” in accordance with Article 283.

Also of note, Kenya explained that its maritime claim was not a recent one, nor had it taken measures to cause malice to Somalia’s claimed rights:

First, the maritime boundary at the parallel of latitude in the EEZ was established in 1979, and not in 2005 as Somalia suggests. It was in 1979 that Kenya first proclaimed its EEZ and began exercising jurisdiction based on that boundary. The text of the Presidential Proclamation of 28 February 1979 is set out as Annex 19 to Somalia’s Memorial. Prior to the MOU in 2009, Somalia never disputed this boundary. In fact, the EEZ boundary was the extension of an uncontested Anglo-Italian territorial sea boundary from the colonial period…

“…Kenya’s exploratory activities in the disputed areas have been only of a transitory character. They are well within the range of activities that, as the Court indicated in the Aegean Sea case, cause no irreparable prejudice to the rights of other States…In this light, there is no basis for Somalia’s alarmist accusations against Kenya — and most certainly no justification for the accusation that it is an unjust nation taking advantage of its neighbour.”

At its conclusion, Kenya’s legal team asked the court to throw out Somalia’s request for the ICJ to adjudicate the dispute on the above grounds and more:

Overall, Kenya has framed Somalia’s arguments as poor and misguided interpretations of the 2009 MOU and broader aspects of maritime law. A successful judgment for Kenya would potentially delay a resolution and probably embolden the Kenyan government to continue initial energy exploration efforts off the coast in disputed areas.

Contrastingly, the Somali government has stumbled conducting energy explorations anywhere due to a huge corruption scandal that may bankrupt its main partner Soma Oil and Gas.

On Tuesday, Somalia will deliver its side of the case, and Somalis are already skeptical of the prowess behind the Somali government’s legal team — which is unsurprising given the unpopularity of the 2009 MOU that is responsible for the judicial battle.

The Somali representative who signed the infamous MOU was then-Minister of Planning and International Cooperation Abdirahman Abdishakur Warsame, who has declared himself as a a candidate for president in upcoming elections.

While it is a longshot Abdirahman could win, imagine the impact it would have on Somalia’s maritime case.

Indeed, Somalia’s elections are not just a signpost for where the country stands in its journey toward democracy, but one that may determine its economic prosperity and territorial sovereignty.

Equally important, signed agreements in Somalia are often not taken seriously or assumed to be the basis for renegotiation later as provisions fail to be implemented. A good example of this would be the Addis Ababa agreement between the Jubaland administration and the Somali government.

However, former Somali government officials probably did not properly appreciate the ramifications of signing such an important document in the context of international law — an arena in which Kenya has shown itself masterful. Just ask Kenyatta and Ruto.