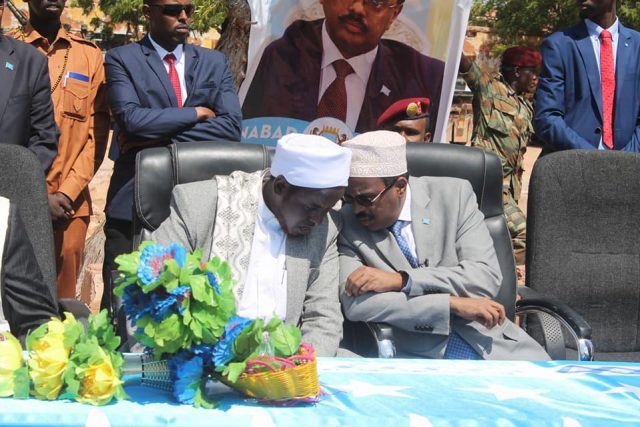 As part of his tour of Somali regional states, Somali President Mohamed Abdullahi “Farmaajo” visited Dhusamareeb this week to validate the December 2017 peace agreement between the Galmudug administration and Sufi militia Ahlu Sunna Wal Jama’a (ASWJ). ASWJ, as a multi-clan Sufi militia, controls Galmudug’s capital among other areas and has been a stalwart against fighting al-Shabaab.

The terms of peace agreement, which was reached through talks in Kenya and Djibouti through mediation by IGAD, included the following, among other provisions:

The agreement is still vulnerable to failure unless it addresses ASWJ’s significant grievance that the federal government of Somalia (FGS) had not provided the group with the requested salaries and equipment for security forces as agreed upon in previous deals.There is a serious risk that the Galmudug administration will not be able or willing to pay these salaries, and this could inevitably unravel militia integration efforts.

Secondly, the agreement’s proposition that ASWJ’s regional parliamentarians will be added to the Galmudug assembly certainly should require parliamentary action and a presidential signature to codify the decision into law. If regional constitutions are to be the letter of the law in each administration, it will be important moving forward to integrate the articles of ad hoc peace agreements into regional law through the appropriate processes. In fact, some stakeholders already see the decision as an illegal one.

There are concerns, particularly among Saleeban clan members in Adado, that the terms of the agreement are outside the bounds of the regional constitution. The current allocation of seats in parliament was decided during the state formation process after a careful negotiation among communities to determine how to share political power. Thus, there is a legitimate belief that any change to this agreement should require social and political consultation, as well as a constitutional amendment.

As a result, in a recently released video, a faction of the Saleeban said they are going to block any future visit by Galmudug president Ahmed Duale “Xaaf” until the “illegal” aspects of the ASWJ agreement are reconciled. There were also public protests in Adado this week, as shown in the video below.

Galmudug’s state house director told Radio Dalsan that Galmudug is ready to resolve these concerns. But once again, political negotiations in Somalia that excluded key stakeholders are resulting in fissures elsewhere in area of conflict, and this has occurred consistently throughout Somalia’s regional state formation process.

Galmudug president Xaaf may be willing to risk support among the Saleeban if he can leverage the military strength of ASWJ to oust al-Shabaab from areas in Galmudug. But it will be very difficult for him or the Somali federal government to gain actual command and control of ASWJ forces without building further trust that would come with proof that Galmudug and the FGS are serious about providing salaries and equipment to the militia.

Until such solid cooperation can be built over time, it may very well occur that ASWJ continues to act autonomously despite the peace agreement. So, the Galmudug administration should take appropriate legal, parliamentary, and socially diplomatic steps to maintain its current base of support as it seeks the backing of other regional factions.

Like Loading...
‹ Around the Horn: Dadaab’s Decline, Kenyan Political Violence, and More
Despite AMISOM and Drones, Al-Shabaab most deadly African Islamic Militant Group ›