PHOTOS: Al-Shabaab Damage Equipment During U.S. Base Attack in Kenya

On the morning of January 5, Al-Shabaab attacked an airstrip at a U.S. base in Kenya’s Lamu County, resulting in the death of at least four Shabaab fighters and heavy damage to American and Kenyan equipment. The attack on Camp Simba began around 5:30AM and reportedly lasted four hours.

Al-Shabaab said in an official statement that members of the group’s Martyrdom Brigade carried out the attack.

This is a divergence from other high-profile attacks where the group employed more elite fighters from its Abu Zubeyr/Saleh Nabhan Brigade that was responsible for mass raids at El Adde, Leego, and Janaale in Somalia. (For more in depth discussion, see Prof. Paul D. Williams’s piece here, particularly footnote 3 on the brigade naming convention.)

The U.S. and Kenya denied al-Shabaab’s claim of incurring severe casualties, but the damage to the equipment was more visible, including the following (via al-Shabaab media and WaPo): 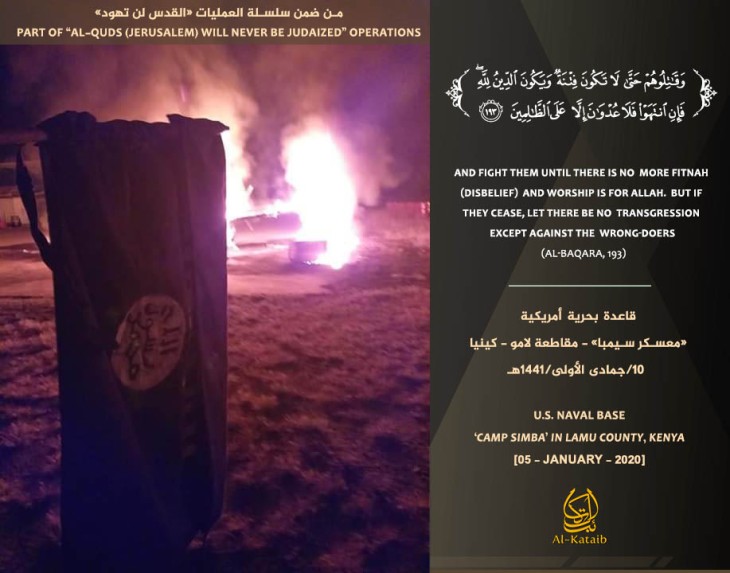 Al-Shabaab also stated the group had “successfully stormed the heavily fortified military base and [took] effective control of part of the base.”

However, from photos the group published, it did not seem to make it past the airstrip where it incurred heavy damage against aircraft and vehicles located there.

In fact, Camp Simba’s airstrip appears to be at least 1.5 miles away from the other parts of the base.

So while al-Shabaab provided proof of the extensive damage it incurred to U.S. and Kenyan equipment, it likely wildly exaggerated the extent to which it was able to breach other parts of the base.

Potential objectives of the attack may involve the following:

Like Loading...
‹ Amid New Qatar Allegations, Is Gulf Investment Good for Somalia?
Key Updates to Al-Shabaab’s Attack on U.S. and Kenyan Forces ›