On April 28, Somalia announced 48 new coronavirus cases, including the first confirmed positive tests in the Southwest region. The total case load in the country has reached 528, with 28 confirmed deaths. 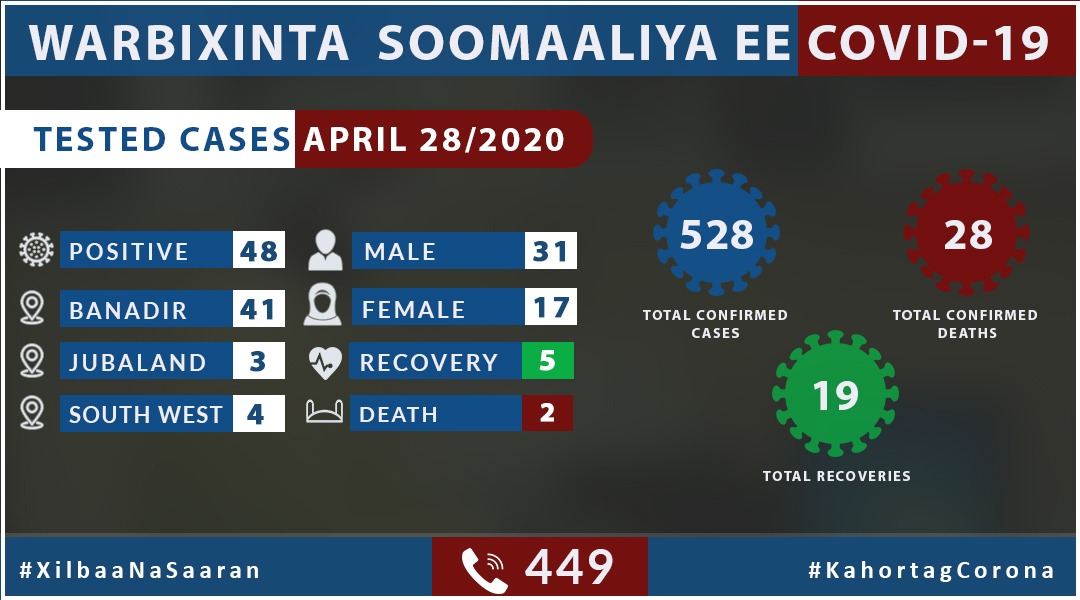 The new cases in the Southwest region come as the director of the main hospital in Barawe, Dr. Cabdulaahi Cabdiraxmaan Nuuraane, raised the alarm of community transmissions occurring in the port town.

Dr. Nuuraane told the media that a suspected coronavirus patient had died in the hospital and that the facility was unprepared to deal with an influx of others who believed they contracted the virus.

This week, the World Food Programme (WFP) delivered medical supplies intended for the quarantine facility in Barawe. But there is a clear gap in testing for the virus, particularly outside the capital.

Only Mogadishu, Garowe, and Hargeisa have testing machines, and only 692 tests had been conducted in Somalia as of April 26. The shortage in domestic capacity has often forced Somalia to send samples to other countries, hampering its ability to test on a mass scale. (Note: The government has not released data on the number of internal tests versus external tests that have been conducted.)

As a result, the Federal Government of Somalia (FGS) has no way to determine the scale of the outbreak in other regions or prioritize resources accordingly.

Meanwhile, rumors of mass community transmissions are occurring underground as grave sites become scenes in which dozens of suspected coronavirus victims are buried without a formal conclusion of their cause of death.

This is shocking, our people need to follow public health advice & guidelines. Covid19 is spreading in Mogadishu & the rest of the county. About 30-40 of the bodies are brought here for burial every day according to this gravedigger who has over 40 years of experience. #Sad pic.twitter.com/Vqevi2g4TX

VOA journalist Harun Maruf also reported the first confirmed case within the African Union Mission in Somalia (AMISOM) as a Ugandan soldier who had been in the country for six months.

First AU soldier tests positive for #Covid19. The soldier was based at Mogadishu seaport, has been in the country for around 6 months, AMISOM source. AMISOM says it put in place protocols at MHQs, including awareness campaign, water points, disinfectants https://t.co/hxwU6YsOuC

During an ebola outbreak in 2014, AMISOM delayed a troop deployment from Sierra Leone and inevitably withdrew its existing troops from Somalia over fears of bringing the virus to areas where its troops were deployed.

#AMISOM forces in Dhobley have handed over several boxes of hand washing soap and public sensitization materials to members of the local community as part of their support to combat the spread of the #coronavirus. pic.twitter.com/peBRsc5mtS

…however, as coronavirus cases rise in Somalia, it is unclear what measures AMISOM has put in place to reduce the risk that its personnel become vehicles for further transmission.