Somalia: Leaders Must Reach Across The Aisle 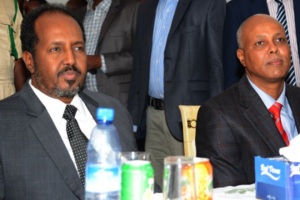 26 November 2014 — The oft-asked question by the Somali intellectuals during the usual episode of political bickering is, ‘’which type of political system can end Somalia’s vicious cycle of political crises?”

It’s yet another episode of the infamous series of political squabbling — the political temperature in Villa Somalia is at boiling point.

Prime Minister Abdiweli Sheikh Ahmed’s government is crumbling, but unlike his predecessor, he is fighting tooth and claws to retain his job. The “no confidence” motion that’s pending will make or break the future of the executive authority in Somalia.

After two years in power, President Hassan Sheikh Mohamud’s six pillar plan that he promised to implement during his tenure seems elusive, not to mention none of them has been accomplished sufficiently. He has constantly scapegoats his co-principal, the Prime Minister, over his failure to translate his goals into palpable functioning system. His main achievement in his short list of laurels is that he appointed two prime ministers only to find out they were not servile, and rather, threats to his interest.  He sought the sacking of former PM Abdifarah Shirdon through arguably corrupt means and is struggling to do the same with his second.

Scapegoating has become the president’s modus operandi and what follows is often political stalemate.

Professor Abdi Samatar wrote an article titled, From a failed elite to a farce in Somalia. In it, he argued that the President has failed Somalis and instead of honorably admitting his failure, he has blamed the PM for his under-performance. The professor further cited the incompetence of the current Presdient from insecurity in Mogadishu to lack of government policy to guide the country to a constitutional referendum to the dire level of corruption.

All above are evident in Somalia as we speak, it has squandered one important asset: the public goodwill. Somalis are more cynical today than during the transitional period. Resilience is a trait that differentiates Somalis from the rest of the world, but, I am afraid, we are losing our unique trait due to this gross incompetence and recurrent political unrest.

The Problem with the Parliament

The Somali parliamentarians are like our cellphones: they are recharged with few dollars. As the Somali adage says, Hal Xaaraan ah Nirig Xalaal Ah Madasho (illegitimate or stolen camel doesn’t give birth to legitimate calf). The parliament was selected through a corrupt process, and it’s delusional to expect them to act scrupulously in their endeavors. Most of them are in possession of foreign passports, and their families are in comfort-exile in Europe or America and don’t care enough about the welfare of Somalis in Somalia.

Their main mission is to make money because anarchy is a booming business. Abukar Arman perfectly described these kind of politicians in one of his latest masterpiece in which he said, “Addis Ababa is a busy hub. It is where Somalia’s reprehensible political dysfunction is showcased, and Ethiopia’s capacity to manage that dysfunction and its byproduct is amplified. Higher officials from Mogadishu, Hargeisa, Garowe, Kismayo, etc., make virtually biweekly visits to pay homage, attend one futile meeting or another, take orders or to fill up their respective political fuel tanks.”

The so-called international community almost unanimously condemned the President’s move to oust the Prime minister, they threatened to cut the aid they used to give the government, and sent a special delegation to pressure the opposing sides to come to negotiating table.

However, the president flouted and continued his endeavor to sack the Prime Minister, and he even threatened to appoint new prime minister if the current one refused to resign or the parliament failed to pass the no-confidence motion.

Overall, Somalis are caught between a rock and a hard place: anarchy, hunger and al-Shabaab from one side and corrupt politicians and a dysfunctional political system on the other side. Their hopes are deflated, dreams shattered and are only waiting for Divine power to intervene. The current dispensation that is based on clan has nothing good to offer; it only  exacerbates the dire situation.

Parliamentary System Vs. Presidential System And The Constitutional Ambiguity.

Theoretically, Somalia has adopted a parliamentary system of governance, but practically, it’s a purely presidential system. The president is a control freak which results in consistent squabbles with Prime Ministers; he is in search of a premier of his choice, a pliable and servile individual.

The country’s political culture is at risk if it continues to use a parliamentary system because the future of Somalia cannot be left in the hands of inept and corrupt parliamentarians who are driven by greed. The presidential system potentially can curtail this kind of political bickering as the president will be both head of state and government. The parliamentary system can be adopted later when the political parties become mature and the country stands on its own feet. Meanwhile let’s put it on moratorium on it at the soonest opportunity..

Similarly,  a co-authored insightful piece by Prof Afyare and Amb Abukar proposes a complete overhaul of the system and give reasons why the presidential system will be more effective. You can read it here.

More broadly, the constitution that’s supposed to guide the country to the right path is actually the Pandora’s Box. It’s ambiguous and it often confuses and creates crises. The constitution-making process was marred by many flaws such as political expedience, secrecy and exclusion. The earlier we call for a constitutional plebiscite, the better.

Pessimism of Intellect, Optimism of The Will

Like any other nation, Somalia deserves peace, dignity and rule of law. In order to achieve this, we must accept that it’s the duty of every Somali to contribute to those endeavors. There are many players i.e. regional governments and multinational cooperation, in theater of Somali politics and every player has his own myopic strategic interest. Some players think their interest can be achieved in anarchy while others think stable Somalia is the best way to achieve their interest. As a Somali what are you supposed to do?

We should be brave enough to go against the grain even if it means betraying our own clan for the sake of greater Somalia. Sometimes courage and will can overcome odds. This may sound idealistic  but rest assured you can change nothing if there’s place for mere stuff like clan in your heart instead of the greater picture of Somalia.

We should be intelligent enough to be pessimists with a healthy dose of skepticism. This will help us see the interests of foreigners as they are exactly because most of them may not be as they seem. The main challenge we are facing is to live without illusion and without becoming disillusioned.

The youth—those who live inside the country and in the diaspora—should collaborate and form a movement that’s based on sound ideas to counter the current corrupt and clan-based political culture. The youth are often excluded from decision making processes, and this was apparent during selection of parliament and promulgation of the ambiguous constitution by clan elders. The time has come for youth to make the political space of the country a bit crowded.

Ahmed Hassan is a social activist and critic interested in Somali politics from Dadaab refugee camp. You can find him on Twitter at @pansomalist.