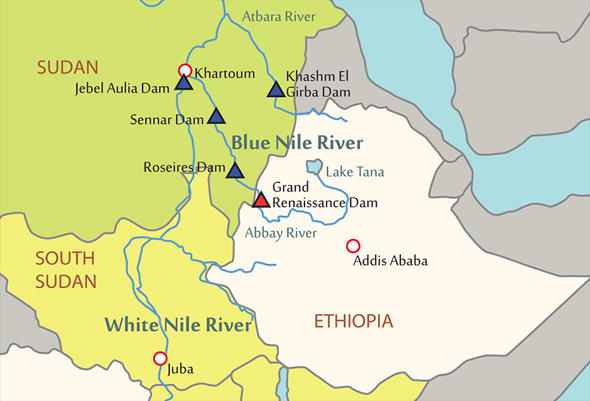 Ethiopia continues to reject calls from Egypt to agree to third party-sponsored negotiations on the construction of the 6,000 MW/$4.8 billion Grand Ethiopian Renaissance Dam (GERD), where Cairo says inefficient use of water diverted from the Nile will bring a post-coup Egypt dealing with civil unrest and various militant groups further to its knees.

After multiple rounds of failed tripartite talks with Sudan, Egypt will find it hard to force Ethiopia into any internationally-mediated arbitration since most contexts require mutual consent–unless it can show the potential for extreme harm caused by the dam to the UNSC, for example.

Ethiopia has built up important regional allies against Egypt on the issue by signing contracts with “power-hungry” neighbors–including Sudan, Kenya, and Djibouti–for electricity exports. A suspiciously accidentally public discussion among Egyptian officials about funding anti-Addis Ababa rebel groups that coincided with a visit by Egyptian military officials to Somalia in June 2013 sparked more discussion about Cairo’s alternatives to the negotiation table if its own “diplomatic offensive” fails

In response, Ethiopia likely will look to [1] continue strategically allying with political leaders and militias in Somalia along the Ethiopian border and [2] use Kenyan and Somali allies (like ASWJ) to counter or apprehend rebel elements as chosen strategies rather than helping Somalia build an infrastructure that would allow it to benefit from energy exports like other regional countries.

In addition to Egypt’s concerns about downstream water levels, efficiency, and the structural integrity with GERD, a discussion of the plight of Ethiopian communities displaced from overall dam construction in the country and environmental concerns warrants more attention.

The Sudan People’s Liberation Army (SPLA) retook the oil-producing town of Malakal in Unity state after rebels retreated in a self-proclaimed “tactical withdrawal.” The SPLA’s move on the town is a strategic win as this can improve the government’s negotiation position as talks look to re-start. If the SPLA holds its ground, it also can eventually increase oil production (and gov’t coffers) if extensive repairs on the destroyed facilities are resolved.

Clashes have continued despite a “cessation of hostilities agreement” signed in January 2014, and it will likely be the goal of the government and rebels to gain important territory before the deployment of an IGAD Protection and Deterrent Force.

Amid threats of U.S./EU sanctions due to little progress in peace talks and embarrassing stories about stealing UNICEF aid in the press, South Sudan has hired public relations firms KRL International and Podesta Group–which was also employed by Somalia–to improve relations with the U.S.

The registration documents with the U.S. Department of Justice detailing KRL International and Podesta Group’s work in South Sudan can be found here and here, respectively.

Categories: Around the Horn, Ethiopia