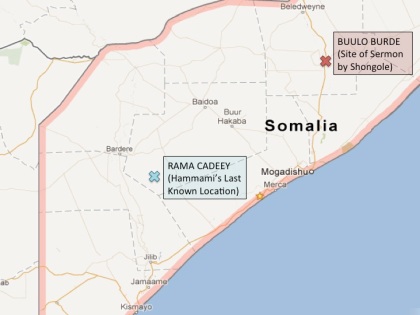 For a background of the conflict between Hammami, foreign fighters, and other al-Shabaab factions, see here and here.

The initial Bar Kulan report alleged that senior leader Fuad Shongole gave a sermon in Buulo Burde town mosque in which he described killing of Hammami during an ambush on him and his allied fighters in Rama Cadeey village in Somalia’s Bay region.

However, no other credible news agencies independently verified the report, and observers of the saga doubt the veracity of the claim due to the nature of Bar Kulan as the sole source.

News site Dayniile–which initially piggy-backed on the Bar Kulan report (and is not always reliable)–already has backtracked from claims of Hammami’s death.

An updated article from Dayniile claims to be quoting un-named al-Shabaab officials (again it is not known who is propagating the info) who state that Hammami is “still alive.” It also quotes an alleged attendee of Shongole’s lecture who claims that Shongole actually said that al-Shabaab killed a foreign fighter named “Sharif,” i.e., not “Omar” or “Abu Mansur.” Since the lecture does not appear to have been recorded, these details are difficult to confirm unless other witnesses come forward.

Importantly, no prominent pro-Shabaab sites have carried news about Hammami’s death; no influential al-Shabaab leaders–or even Hammami through his likely twitter account— have issued an update on the situation. In absence of info from these sources, rumors of Hammami’s death are once again based on unconfirmed and circular reporting, and there has been at least one retraction.

Lastly, a credible Mogadishu-based freelance journalist with a history of successfully confirming similar details says that he spoke with sources close to Shongole who said that the leader did not address the issue at all in his recent sermon.

All these factors make the claim that Hammami is dead similar to past false accusations.

These types of rumors could fuel (and could have been launched in order to exacerbate) public bickering between al-Shabaab factions, as well as discourage Somalia from being the country of choice for would-be jihadis.

In the past, al-Shabaab has wavered between outright ignoring public discussion of internal problems and issuing delayed statements in the aftermath of public rants by dissidents like Hammami.

The continued spread of this rumor–regardless of how false it may currently be–is not an issue that al-Shabaab would like to be stuck addressing publicly because it is a distraction from the group framing itself as united, strong, welcoming to foreign fighters, and a credible alternative to the Somali government.

It is also important to note that al-Shabaab’s various public relations outlets like to take their time in responding to these kinds of issues in order not be appear rattled, weak, or indecisive. Therefore, it is difficult to tell when an official response (or a verified response from an influential leader) will be released.