On 8 January 2014, al-Shabaab’s  al-Andalus radio outlet released a Facebook message to telecoms and communities under its territories stating that mobile and fibre optic Internet access would be banned in 15 days.

According to the post, anyone violating this new ban after the deadline would be considered to be “working with the enemy” and would receive the appropriate Shari’a punishment.

The group claimed the new restrictions were in reaction to the threat of Western countries such as the U.S. intercepting sensitive information that could lead to attacks against the group.

It appears al-Shabaab will still allow access through other means including Internet cafes or dial-up and satellite connections.

As a result, foreign countries may still be able to infiltrate digital networks in al-Shabaab territory, but the ban will further limit an otherwise growing freedom to locals since the Somali federal government (SFG) looks to soon connect the country via fibre optic cable.

In a context where Edward Snowden’s NSA leaks seem ubiquitous, al-Shabaab’s partial Internet ban is also a continuation of the group’s paranoia regarding new technology and spying.

After a failed U.S. Navy SEAL raid in October 2013 in the al-Shabaab stronghold of Barawe, militants allegedly began intimidating smartphone users but stopped short of an outright ban.  (Though, Ask Hamza Mohamed about his sullied iPhone after one al-Shabaab encounter just outside Kismayo.)

Al-Shabaab has tried to justify previous bans by explaining that its efforts to “defend” the community outweigh the perceived negative impact on locals.

In September 2013 in Barawe, the group publicly burned a pile of expired medicine from Turkey in an effort to prove to communities the danger of foreign aid and its priority to protect the health of Somalis.

Al-Shabaab created a similar pyre in November 2013 in Dinsoor after confiscating alcohol  allegedly from Ethiopia. 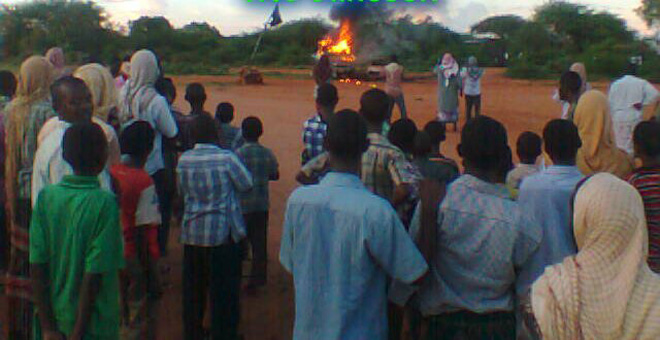 However, its controversial ban of aid groups two years ago and restriction of humanitarian access during the height of the famine in Somalia–in addition to failures by the international community and the Somali government–contributed to the reported death of at least 260,000 people. Half of those who died were under five years of age.

Seemingly out of touch, al-Shabaab spokesman Ali Dheere reportedly stated that the famine was “utter nonsense, 100% baseless and sheer propaganda.”

The aid ban decision even exacerbated tensions between top leader Ahmed Godane and senior figure Mukhtar Robow since Robow’s Rahanweyn clan community was especially affected by both the famine and lack of resources to respond effectively to it.

During the crisis, al-Shabaab for some time was running its own IDP settlement named Ala Yasir Camp where Channel 4 (UK) journalist Jamal Osman interviewed Ali Dheere on how the group could provide for communities in the absence of international assistance–not counting the shipment of al-Qai’da aid that arrived.

But in another instance of “tough love,” al-Shabaab soon shut down the camp around October 2013 and sent the residents packing with a few goods to battle the elements and rebuild their lives.

Al-Shabaab did not make it easy for humanitarian workers looking to fill the gap, as in one case:

“A humanitarian worker was reportedly arrested by al-Shabaab in Aw Baale area of Merka town, Lower Shabelle region during a food distribution exercise for former residents of Ala Yasir IDP camp who had been forcefully returned by al-Shabaab in October.”

These slick video cuts would be a fitting advertisement for an agricultural cooperative looking to mainstream its practices. But al-Shabaab’s indiscriminate attacks on tea shops, restaurants, and alleged harassment of pastoralists and returning refugees take much away from the narrative that it is striving maximally to help Somalis contribute to a well-rounded and sustainable economy.

From the outside, al-Shabaab’s actions appear to be prohibitive to Somalia’s technological future and overall development. And of course, many Somalis interviewed about al-Shabaab’s stance toward the Internet deplored the group’s recent decision.

What should not be underestimated, however, is al-Shabaab’s efforts to draw support among locals by ramping up its own messaging to communities (via social media, local radio stations, and meetings with local leaders) while also limiting access to alternative sources of information (via limited Internet access).

Much of the media focus on al-Shabaab in the last two years has focused on how the group has lost control of some major cities but still retains the ability to carry out small-scale and large-scale attacks like the Westgate siege.

(Apparently, the Westgate attack was so profound–or the follow-up investigation so much less so–that the NYPD, FBI, and Kenyan military offer different accounts on key details now several months out from the attack.)

For sure, al-Shabaab’s territorial losses and guerrilla tactics are key issues to consider when looking at the group. What is often overlooked is the group’s intense effort to showcase its style of governing.

The group announces rules and enforces them often brutally or against the wishes and traditions of local communities—but predictable “justice” and violent threats go a long way in a weak state.

In another recent example, al-Shabaab tried to flex its capacity as an objective mediator by hosting an alternative forum to the Somali government (perceived by some as bias against certain clans) in order to resolve outbreaks of clan violence between Biimaal and Habar Gadir (seen as closer to the government) militias in Lower Shabelle.

All these factors highlight how the SFG is fighting a battle with al-Shabaab on at least three fronts.

If one unravels al-Shabaab recent crusades against technology, what will be found is a broader competition for control and influence. Al-Shabaab has attempted to draw support through a combination of threats, indiscriminate violence, and public works.

Somali Diaspora, local communities, and to some degree foreign partners have unique tools to achieve the same objectives without al-Shabaab’s destructive consequences.

Hopefully, the Somali government will begin to leverage these strengths in order to institutionalize change outside the barrel of a gun.