Home › AMISOM › Which AMISOM Countributor Is Most Accountable for Its Actions in Somalia?

Which AMISOM Countributor Is Most Accountable for Its Actions in Somalia? 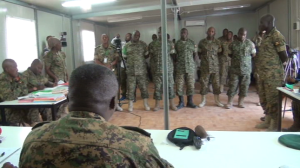 This week, a Uganda People’s Defense Force (UPDF) soldier serving under AMISOM was demoted and sentenced to a year in jail in an ongoing corruption trial in which 17 others face similar charges for illegally selling military supplies and fuel in Somalia.

The story raises the question: which AMISOM contributing country is most accountable for the actions of its forces in Somalia?

AMISOM countries are supposed to operate within the Civilian Casualty Tracking, Analysis & Response Cell (CCTARC) framework in order to account for civilian casualties, and contributing countries are also expected to address other potential criminal actions under its own military regulations.

On many occasions, Uganda has suspended or publicly prosecuted soldiers who have committed crimes in Somalia:

The Ugandans also have been involved in other fatal incidents in Somalia where it is unclear what action has been taken to discipline soldiers or compensate affected families.

Certainly, the Ugandan press has recognized the difficulty in maintaining a disciplined force and has praised the actions taken to root out rogue members of the corps (via The Observer):

“Now, even critics admit that UPDF is a disciplined army. However, being disciplined doesn’t mean that all individual soldiers are angels. Soldiers are recruited from the rest of society with its moral deficiencies; and so, rotten tomatoes are only to be expected. However, a disciplined army would ensure that rotten tomatoes in its ranks are not allowed to soil the image of the entire force. That calls for the army leadership making it a point to punish wrongdoing without fear or favour.”

Equally important, Uganda appears much more transparent than Kenya, as well as Ethiopia, whose military and paramilitary forces are often accused of abuses — especially in Somalia’s border areas. Despite the frequent accusations and chilling pictures that have been released, there have not been equivalent efforts by Ethiopia to showcase that it is holding its forces responsible for these actions.

Locals have expressed anger and frustration particularly with Ethiopia after these incidents. However, senior officials within the Somali federal government almost never raise the alarm in these cases — even though they are very quick to react with unmitigated rage when it occurs in other countries. In this way, responsibility lies in part with Somali government officials as well as the Ethiopian government.

While giving high-level exposure to misdeeds during peacekeeping operations risks tainting the perceived professionalism of a force, it also proves that a country is willing and able to address wrongdoings through transparent legal processes. This may offset some of the negative repercussions for a country like Uganda, which wants to be seen as a continental leader in peacekeeping.

If more countries are to be encouraged to follow Kampala’s lead, there has to be more outright condemnation against other countries that are not making full faith efforts to address military abuses in both domestic and foreign operations.