Home › Federalism › Is Somalia Set for Another Breakaway State?

Is Somalia Set for Another Breakaway State? 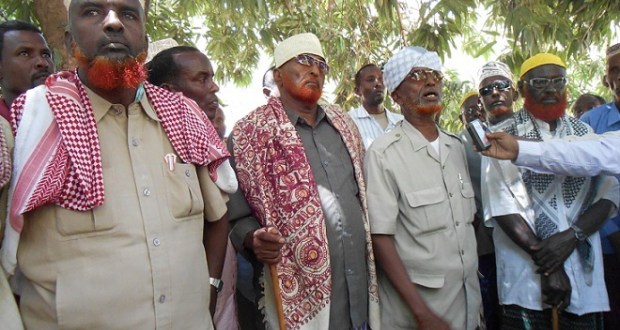 Elders in Somalia’s Hiiraan region have threatened to establish their own administration as the crisis to form the latest regional state continues to stall.

“Immediately after we wrap-up the inauguration ceremony to crown Chief Hassan who will be the next Chief of the Xawaadle clan, we shall focus on forming Hiiraan regional state with a President, deputy President and members of parliament and we shall be an independent State from the federal government of Somalia unlike the other regional states in the country,” said Chief Ali Ugaas Mohamed Ugaas Shafeec.”

Hiiraan elders, particularly from the Xawaadle clan, have disputed about how the state formation process with Middle Shabelle should occur.  And this past June, Xawaadle leaders felt spited again as the leader of clan was left off a list of 135 elders who will pick members of the electoral college in upcoming elections.

The elders probably do not seek to outright secede from Somalia, as the language may seem to indicate. Rather, they likely intend to gain concessions from international mediators and the federal government.

First of all, they may want to exploit the contested rules regarding the boundaries of Somalia’s federal member states.  A federal state comprising only of Hiiraan region (without Middle Shabelle) would violate Article 49(6) of the provisional constitution stipulating that federal states must be comprised of two or more regions.

But there remains an important exception to this provision. It seems for now that Galmudug and Puntland administrations may be able to continue sharing Galkayo city and Mudug region, despite the ongoing debate about whether the provisional constitution allows federal states to do so. If Galmudug and Puntland can receive an exception, Hiiraan may claim that it should receive such a break as well.

Even if Hiiraan State fails to gain any legitimacy from the federal government, there are other benefits to the potential move.

Creating a breakaway administration has been one of the staple strategies during Somalia’s federalism process to exercise grievances and force concessions from other parties.

While an earlier “Southwest Six” initiative by politicians who wanted to create a Southwest State with six regions failed, two of its leading factional leaders gained high-level positions: Madobe Nunow, the SW Six president, became an ISWA minister, and the SW6 Vice President, Mohamud Sayid Adan, became VP of Jubaland. So, SW6’s futile political gamble paid off at some level for the elites involved.

For Hiiraan elders, this may seem like a win-win situation: At most, they aim to succeed in forming their own administration without having to compromise with stakeholders from Middle Shabelle. But even they are forced back to the negotiating table, they can expect more favors to come in their direction.

Like Loading...
‹ Stunt or Stand for Democracy? Villa Somalia’s Response to the Failed Coup in Turkey
AMISOM and Al-Shabaab Fight For Control Of Somali Town…in Social Media ›