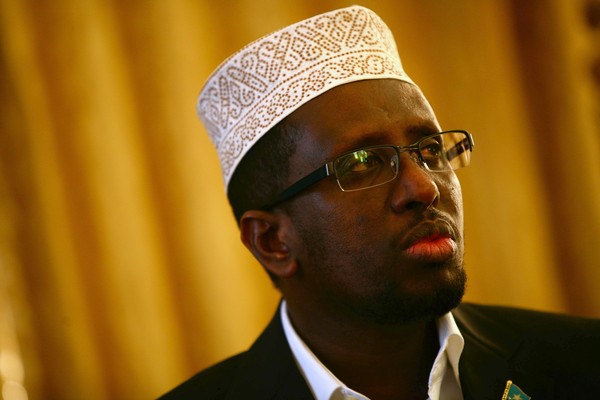 On 20 July 2012, President Sharif Sheikh Ahmed declared his candidacy for presidency at the City Palace Hotel in Mogadishu.

Many supporters–from traditional elders to politicians, women, and youth–turned out for the event.

However, based on the United Nation’s Roadmap process and the grip that al-Shabaab still holds on the country, President Sharif is not campaigning for the votes of ordinary Somalis.

Instead, Sharif is looking for the enough support among the soon-to-be selected Members of Parliament, who will attempt to select a new President and Parliament Speaker before the mandate of the Transitional Federal Government (TFG) expires on 20 August 2012.

From Rebel to President

Sharif’s rise to power in Somalia has not been a product of his verified popular support through popular elections.

Rather, during his transformation from Islamic Courts Union (ICU) militant to politician, Sharif has succeeded in outmanouevering his local rivals, captivating the international community, and catering to Somali elite to establish a foothold at the throne of official Somali politics.

With Sharif’s second bid for President, the leader is following in the footsteps of other historical rebel leaders who put down the gun to rule by political means for seemingly interminable amounts of time–a sentiment ironically caught in a quote from an elder speaking at Sharif’s campaign announcement:

Our president is relatively young and can serve his nation for the coming 10 years.

At the moment, Somalia is trying to make political gains to complement the notable–but hardly comprehensive–security gains in Mogadishu and major towns closest to the Kenyan and Ethiopian borders.

The United States, in trying to secure its interests, appears to be interested in seeing new political leadership in Villa Somalia–perhaps to offer a guise of democratic governance.

In a surprise visit to Mogadishu on 12 June 2012, U.S. Assistant Secretary of State for African affairs Johnnie Carson reportedly told President Sharif that the U.S. would not be in favor of a second term.

Nevertheless, Sharif stated on 23 July 2012 that he is “very confident” of winning a second term.

Though there seem to be countless presidential candidates who have presented their credentials for Villa Somalia, President Sharif must confront several skeletons in his closet to present himself as a credible candidate, as opposed to the election’s likely winner.

Corruption in the Somali government is well-known, but the UN’s recent report on Somalia indicated specific instances in which President Sharif embezzled government funds and gave passports to pirate chiefs–examples that are likely more systemic than anecdotal.

Though of course he has denied responsibility, Sharif shares major responsibility for participating in a culture of corruption and sabotaging any significant means of financial accountability. All this has further enabled violent groups like al-Shabaab to remain as a comparable alternative to Somalis who seek the least of two bad options.

For this reason, the UN and other watchdogs have expressed serious concerns over that the Somali shillings recently printed in Sudan worth $130-150 million will be used by President Sharif, Speaker of Parliament Hassan Aden, and Prime Minister Abdiweli as either a political “slush fund” or cash with which to bribe stakeholders for votes on the National Constituent Assembly.

President Sharif may boast about the significant improvement in security in Mogadishu and other areas of the country since August 2011. But he can take little credit for these accomplishments because they have been due to the military efforts and financial expenditures of his allies in AMISOM and force from Kenya and his former rival Ethiopia.

Contrastingly, Sharif cannot ensure his own safety between areas of TFG control. This is partially because Sharif’s complicity in financial corruption has resulted in only sporadic payments of TFG troops, who are poorly trained and often loot local businesses and setup up illegal checkpoints along transport routes.

Rather than tackle security concerns in Somalia, Sharif has spent most of his time in the comfort of Villa Somalia or traveling abroad and has earned the pejorative title as Somalia’s most travelled head of state–even representing the country at a counter-piracy conference in Dubai while giving passports to pirate chiefs to “incentivize” good behavior.

Replacing President Sharif will only partially solve the structural problems that allow rampant corruption and insecurity that plague Somalia.

However, Sharif does not deserve further opportunities to deprive Somalis of achieving their vision of a peaceful and stable state.